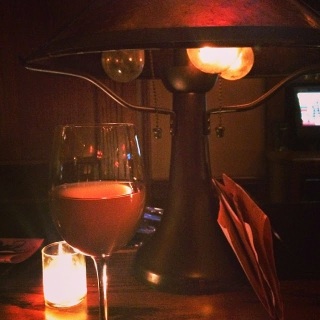 If you’re looking for something that mixes a little Ren Faire with beastly Viking and a little of the modern day craft beer movement, Dansk Mjød Viking Blod is for you. Maybe.

The name alone has to make you want to try it, right? Viking Blod just sounds so gothic that you kind of have to. I’ll admit to not knowing what the hell it was when I spotted it on a beer menu. All I saw was the $14 price tag for an eight ounce glass and had to investigate.
My research told me that Viking Blod is brewed by Dansk Mjød out of Billund, Denmark and it’s not really a beer and not entirely a wine, but a combination of both. If you really want to get technical, you can throw out the straight up “wine” term and call it a beer/mead or honey wine hybrid.
Further investigation involved me ordering up Viking Blod, which comes from an old recipe thought up around the year 1700. This “mead” is actually brewed with hibiscus and hops. The hops give it a slight beer feel but it was way more” meady” and super sweet. One thing to look for or even watch out for is its aforementioned sweetness followed by a huge alcoholic punch in the face (Viking Blod sits at a whopping 19% ABV!!!).
While a “brew” (if we can call it that) like this isn’t my normal thing to order, it was worth a shot to try something that doesn’t come along that often and when it does is not always available. I didn’t really dig the sweetness and wished it came off more like a beer. But if you’re looking to get messed up (a.k.a., drunk) in a hurry, this will do the trick.