Cinco de Mayo seems like a distant memory now. But let’s be honest, you thought about it that day and forgot the next. It’s a typical American thing. Celebrate a holiday for fun, a holiday that’s not even ours. Oh well, whatevs, we do it too. More honesty: we’ll take any excuse to eat tacos, quesadillas, or chips & guac/salsa.
Funny thing this year though…We tried two places before making our taco joint choice and they were both closed because it was Monday. First off, shame on you Rincon Taqueria and Los Molcajetes. And second, I know it was a Monday but how can you be closed on the most American of Mexican holidays?
With those two closings we decided on Tacos Mexico, a place neither Rob nor me had been to in quite a while. It’s one of those smallish places you just kind of forget about. It’s in East Norwalk on Fort Point Street and tucked into a small plaza. That, however, does not mean Tacos Mexico is bad, it’s actually very good.

We popped in to a nice gathering of Americans to celebrate a holiday that we’re guessing no one in the place besides the staff even knew about. Immediately we were served tortilla chips and a variety of salsas so we did what you everyone should do and ordered some fresh guacamole too. Then, us two ‘mericans decided on Mexican Cokes as a beverage. It’s a cane sugar thing y’all.
For us, chips and salsa wouldn’t be enough so we didn’t order tacos. Instead, I remembered something I had on my last visit that I needed to have again; the Gringa. 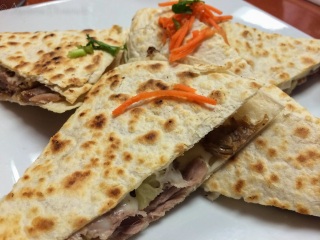 The Gringa is pork or carnitas (or any meat you choose) with cheese and pineapple in a pressed flour tortilla. Tacos Mexico does not skimp on the meat and this is extremely pleasing, obviously. The pork is salty, tender and the pineapple’s sweetness really balances it all out. Even better was the fresh and hot salsas and guac that we kept around precisely for further dipping purposes and to mix up our sauces with our main courses. It’s definitely a “fun with food!” kinda thing.
If you go, and you should, Tacos Mexico will likely have a bunch of white dudes in there like on Cinco de Mayo and that’s cool, it’s still the real deal. You’ll be able to find a bunch of Mexican dishes, a full bar, and affordable and speedy service.
Now, because this we went on Cinco de Mayo, let’s dispel the myth and constant dumbassness that’s associated with this day in Mexican history. No, silly Americans, IT’S NOT Mexican Independence Day. It’s actually a celebration of pride and Mexican heritage due to their epic win over a French army that outnumbered them by almost double. That battle? The Battle of Puebla on May 5, 1862.
More Americans celebrate Cinco de Mayo than Mexicans. We’re sure of it.
Tacos Mexico
82 Fort Point Street
Norwalk, CT 06855
(203) 866-6256
http://tacosmexicollc.com/