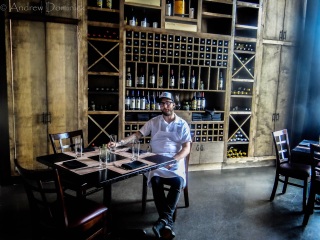 At the end of 2014 I had the opportunity to enjoy a killer brunch at Washington Prime and I joked in that reviewthat I felt like I was the last person left who still hadn’t been there for dinner. It was a good thing that Prime’s owners and Chef Jared Falco felt the same way and invited me back to round out my experience. And they made it a memorable one.
I took up their invitation after the start of 2015, on a chilly weeknight. There was a buzz at the bar and a bunch of the late night dinner crowd was just in the process of finishing up their plates. I confess that I’m starting to like late night dining, not to be that fashionably late dude that dines with the cool kids, but there’s a reduction in the amount of stares you get. You know, the stares that say, “Can’t believe all the food he’s getting. Is he really going to eat all that?!”
Prime’s menu is classic steakhouse with a twist. That “twist” is new age techniques and a ton of badass creativity from Chef Jared. If you read through the menu you will see Caesar salad, clam chowder, meatballs, and poutine but each dish has something different about it, something that Chef Jared worked on and made exclusively his.
That word I used before, “memorable,” what I mean is high quality dishes that look good and taste good and there were lots of them to try. Luckily I brought my grandmother with me to help with all the eating. Now I know you’re thinking, “Aww!” OK, chill, she’s only so much help because she’s picky, as in she won’t eat any seafood, but I definitely tricked her into eating foie gras.
“Is it fish?”
“No grandma, it’s not fish.”
I did not lie.
Cute story of deception = Over. It’s review time.
What I Ordered 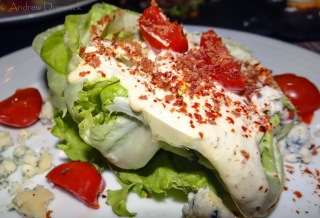 Prime Wedge (Gem Iceberg, pickled tomato, bacon, Ewes blue cheese, chili, house ranch dressing): An easy nominee for one of the better salads I’ve had. Crisp lettuce, creamy ranch and large chunks of blue cheese. Plus, you can’t go wrong with bacon. The chili flakes gave it some spice that was cut by the dressing so it did not overwhelm. 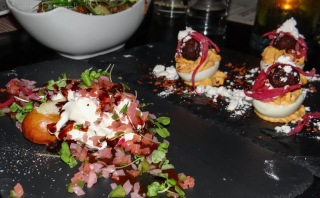 Burrata (tomato jam, fig, basil, pretzel bread): A super creamy fresh mozzarella that I completely destroyed. I confess to wanting more bread to scoop up all the tomato and cheese but this was also the point where I realized I had to pace myself and stop eating every bit of everything. It’s a marathon, not a sprint.
Deviled Eggs (meatballs, pickled onion, foie gras powder): Adding a meatball to deviled eggs is something we all want, we just wouldn’t think to do it. Chef Jared did and it paid off. The deviled egg filling was the creamiest I’ve had in this area. 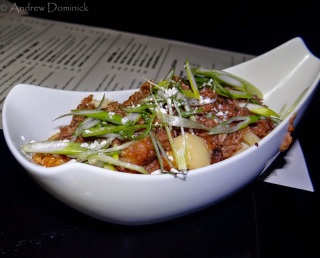 Poutine (oxtail ragu, house fries, cheese curds, green onions): Total comfort food. It’s not your typical poutine topped with gravy, but a meaty, rich braised oxtail. It’s served piping hot and it hit the spot on a cold night. They could have served this in a large trough, I would have gotten on all fours and eaten it all. No shame.
Chef’s Selections 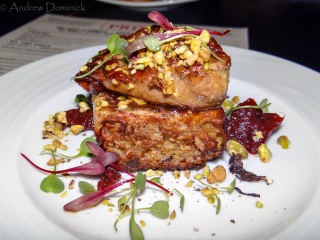 Hudson Valley Foie Gras (local maple syrup, cinnamon toast cornbread, cranberry preserves, toasted pistachios): The dish I got my grandmother to eat and…she did like it! I’ll admit that foie gras isn’t my normal order but I’m a believer in this version. If you’re a little afraid, don’t be. The rich foie gras is made more tolerable to the casual fan or non-foie eater because of the sweet tart of the preserves with the syrup and cornbread there to assist; the pistachios provided a necessary textural element. This is a top notch preparation. 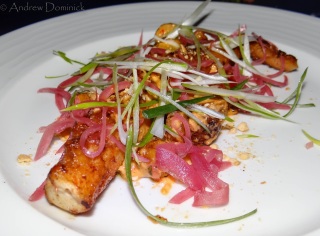 Octopus (pickled peppers, duck fat marble potato, pepper emulsion): This is the small plate that Chef Jared said he’s extremely proud of and I can see why. The octopus is tender even while having a crisp exterior, and the pickled cherry peppers will wake you and your taste buds up. It’s not super spicy as the peppers don’t dominate it but if you dig a little spice (and octopus) this is for you. 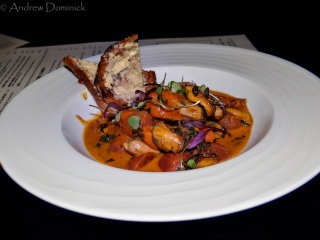 Mussels (out-of-the-shell PEI mussels, parsnip, radish, smoked carrots, uni-fig toast): A great winter dish highlighted by a rich, well-seasoned broth and tender mussels. The smoke in the carrots really came through and the fig bread was a sweet accompaniment. 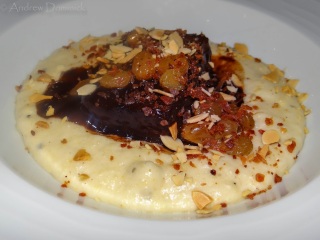 Short Rib (polenta, golden raisins): A well-prepared short rib gets me every single time. A fork tender piece of beef, creamy Anson Mills Polenta, and sweet golden raisins equaled me devouring almost the entire short rib. I only shared this one with grandma a little bit.
Consensus Choice 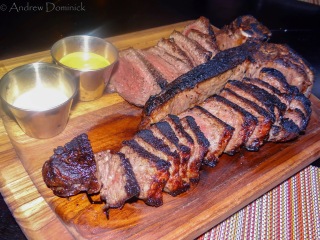 32 oz.  28-Day Dry-Aged Porterhouse: If you go to a place that boasts about having good steak, you have to try it, right? Prime cooks its steaks in 900° broilers and that results in a perfect piece of meat with the deepest crust I’ve seen on a steak, like there’s a legitimate crunch before you get to all that juiciness. If you’re a sauce person go for the umami bomb sauce. I personally didn’t require any sauce. I’m a purist, son.
Desserts 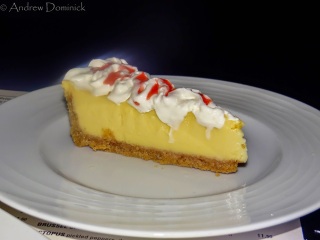 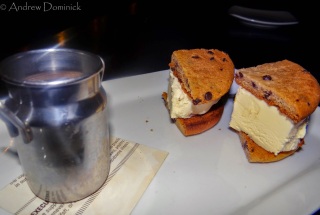 The sweets at Prime are made in-house by Chef Jared. He scoffed at his own dessert skills but I strongly disagreed. The Key Lime Pie was spot on but his twist is using crushed cannoli shells for the crust over the traditional graham crackers. A second dessert was a homemade chipwich that’ll make you feel like a kid again! It’s served with a shot of cereal soaked milk, no doubt borrowed from Momofuku Milk Bar, but very much appreciated.
Final Thoughts
Whew! That was a long one, and I almost never do it dish-by-dish style but there were so many highlights that leaving one out just felt wrong. Chef Jared’s menu at Washington Prime is different, creative, and risky (maybe to some). Many think risky isn’t for them, but give it a shot. “Risky” in this case and from a talented chef really pays off.
Washington Prime
141 Washington Street
South Norwalk, CT 06854
(203) 857-1314
http://washingtonprimect.com/
Washington Prime on Facebook