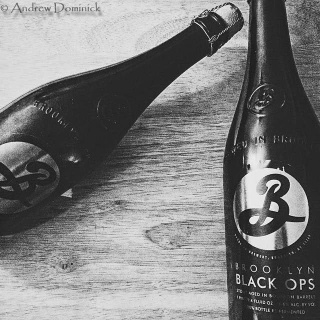 Brooklyn Black Ops is a beer that I waited almost four years to try. Four years. FOUR YEARS!
This all started, wait, you guessed it, four years ago when one of the other Food Dudes, Rob, bought me a bottle for Christmas. The long wait was all my fault. I kept saying that I’d open it when something ridiculously awesome happened, and even though I had some great things happen, I just kept putting it off and putting it off some more. The other sucky thing was that I couldn’t get my hands on another bottle and I didn’t want to drink the only bottle I had. This is called Beer Greed.
Not only was this Beer Greed thing a problem but when I did actually find Black Ops anywhere it was in large format bottles like the one I had but restaurants and/or bars were charging a stupid high amount for it, some at almost double the price of what it would cost at a good craft beer shop.
My prayers were answered at the end of 2014 when I stopped by Ninety9Bottlesto stock up for a New Year’s Eve party with a craft beer tasting theme. I had no idea what I was going to bring and like a moth drawn to a flame I spotted a fresh new bottle of Black Ops. Yeah, it sure as hell got bought, son.
Now with my two bottles I felt I could drink the new one and let my already aging bottle keep getting older and more delicious.
So what’s my fascination with Black Ops? For starters, I am a fan of Brooklyn Brewery, and it was among the first craft breweries I fell in love with when I started getting really into beer. The second reason…Well, have you ever read the description of Black Ops? The first two sentences on Brooklyn Brewery’s website read:
Brooklyn Black Ops does not exist. However, if it did exist, it would be a strong stout concocted by the Brooklyn brewing team under cover of secrecy and hidden from everyone else at the brewery.
How is that NOT intriguing?
I hyped Black Ops way up in my head and damn, it sure lived up to my expectations. (Holds a 92 on Beer Advocate). The 2014 version is high in ABV at 11.6% but this extremely dark brown, almost BLACK beer goes down smooth. It’s definitely one of those take it slow brews or you could end up tripping on your own feet if you have too much. This Russian imperial stout combines chocolate, coffee and vanilla notes that really come through and that alcohol-y taste comes from the four months Black Ops ages in bourbon barrels.
It’s a tough one to find, especially on draft, but if you come across a bottle, you have to throw down the $20-$40 you might pay for one. The 2014 Black Ops was a big hit at the party but I made sure to save enough after the tasting so I could kick back and enjoy a full glass of Black Ops with a good cigar.
If this was a preview of what I can expect for my bottle of 2010 then I’m really excited. Maybe I’ll crack it open. Maybe I’ll wait a little longer. Either way, it’ll likely be epic.
http://brooklynbrewery.com/