There are four B words that make my mouth water and my stomach growl: burgers, bacon, bourbon, and beer. That’s what Killer B—which opened in SoNo less than a year ago—is all about, but it’s also about indulgence, having a good time, and busting out your phones to snap photos of all its extreme edible offerings.

The idea for Killer B comes to us from a friend of the blog, and in real life, restauranteur Greg Pettinella, who you may know from his stints at Amore Cucina & Bar in Stamford, Fortina, and Wahlburgers, just to name a few. The space that Killer B occupies may give some folks a little déjà vu, and that’s because the space it occupies used to be one half of Johnny Utah’s, that Greg transformed into a casual dining area and bar with a cool, industrial feel.

And the food…well, we mentioned the word “extreme” and it’s just that. Normally extreme isn’t our thing, and occasionally, if food is over-the-top, it’s probably not something you’ll find yourself wanting again. Killer B is out to prove that trendy, gimmicky food can be soul-satisfying and fun. It took us a while to be free to check it out, but we were curious since it opened.

THE BURGERS ARE FREAKING HUGE!

Even some of Killer B’s basic (if there is such a thing here) burgers are massive, but there’s one called the Queen B with two pork and beef patties, bourbon candied bacon, provolone, and bourbon bacon mayo. But wait! There’s more! You can switch out the brioche bun and have this burger between two grilled cheese sandwiches. This was a little much for us, and a real challenge to unhinge our jaws to get a full bite of everything. 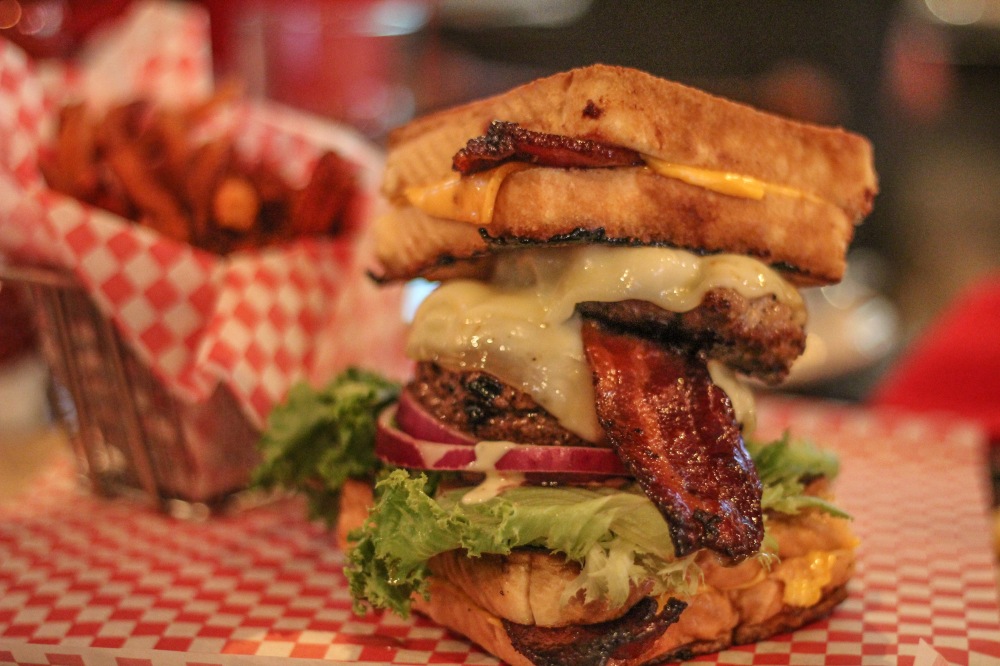 We thought Killer B excelled a little more with their simpler burgers like the SoNo Sunrise (with avocado, special sauce, fried egg), or the Classic (lettuce, tomato, pickles, onions, special sauce, American cheese), which I ordered to get a sense of what their burgers are really like without all the bells and whistles. A touch more salt, and a little less cook (I like ‘em pink/red) and it would’ve won me over.

The fries served with the burger were damn good, and I like that you can upgrade them to truffle, Cajun seasoning, parmesan, or Old Bay. If you’re into sweet potato fries, they have some of the best, and the entire table gave Killer B props because they came out crispy, and stayed crispy.

THEY HAVE OTHER STUFF TOO…

Let’s be honest, you’re not coming to Killer B if you’re a salad eatin’ chick! They have ‘em, but c’mon, let’s be real. The Volcano Potatoes are like an improved order of potato skins; wrapped in salty bacon, with a little Sriracha for heat, honey for sweetness, and plenty of melted cheese. You could also rock with bacon wrapped fried mozzarella, or these insanely delicious looking chili cheese fries that I’m kinda pissed off we didn’t get after I recently saw them on social media.

There’s heavy food here, if you didn’t notice, so if you’re planning on having a burger, choose your appetizer wisely.

IF YOU DO GET A SNACK, ORDER THE BACON!!!

Seriously, this is excellent bacon. It’s torched, it’s glazed, it’s salty, it’s sweet, and some are spicy. You won’t be able to get enough. It’s even available in flights, and in a variety of glazes like bourbon, butterscotch, fire, honey, and orange. Sign up for Killer B’s VIP Card—free of charge—for a complimentary bacon strip during each visit, and for other specials. Free bacon? You bet your ass we became members.

GET THE LOBSTER! OMG!

Chances are you’ve seen Killer B incite virtual drools with their social media posts of a three-pound lobster stuffed with mac & cheese. You need this in your life. I was skeptical, thinking the mac wouldn’t be tasty, and that it was just a gimmick for the ‘gram. It’s great for the ‘gram, and the mac & cheese is gooey and not an afterthought. I found myself going back for forkful after forkful, cutting off meaty lobster from the claws and the tail to mix in with the mac. Great for date night, great for sharing. Sorry I doubted you, Lobster God!

MONSTROUS MILKSHAKES COMING AT YA!

Talk about great for your Facebook Timeline or Instagram. These big shakes might even cause someone to slide in your DMs with “DAMNNN!”, “I need that!”, or “Holy shit!!!” One of Killer B’s staple shake flavors is Vanilla Honey Bacon, a vanilla-honey shake with a bacon bit rim, dolloped with whipped cream, honey-bacon, and nuts. You can really freak out your Insta-audience with the $25 Double Trouble, a 40 oz milkshake, with a ton of toppings, like ours, decked out with penny store candy. Good thing we had about eight people to share with; you’ll need your crew to finish one.

DRINKS AND BEER SELECTION? WAY BETTER THAN WE EXPECTED!

Unlike its Utah’s counterpart, Killer B hones in on the cocktail culture, offering an array of flavor profiles; sweet, smoky, strong, they’re got something for everyone. At the lighter end of the spectrum is Lavender Fields (Absolut, limoncello, grapefruit & lemon juices, house infused lavender syrup), an eye-pleasing drink that’s easy to drink and refreshing; it’s a light/sweet, and the lavender really comes through. For my taste, their signature Smokin’ B had to happen. It’s ingredients (Jim Beam Black, bittermilk smoked honey sour aromatic bitters) might trick you into thinking it’s strong, but it’s strong, sweet, and smoky, thanks to the drink being placed in a smoke infuser, and smoked right in front of you. It’s a very well-balanced cocktail, and one of my favorites in South Norwalk.

There’s beer here! Killer B has a better beer selection than previously thought. Their beer list focuses on Connecticut breweries like NEBCO, Stony Creek, Thimble Island, Two Roads, and more, with a few rare inclusions from time to time. It’s something they should advertise more, because beer geeks like us will come if there’s a good pour (or six) to be had.

Killer B is worth another visit for sure. We’d give their burgers another shot, considering we thought they were just good, not great, and that Lazy Man Lobster Mac has to happen again. The bar was a pleasant surprise so that alone is worth it, with plenty of bacon to snack on, of course.