There’s a rule of journalism that states you shouldn’t write about family or friends. Normally I adhere to it, but not always. I’ve broken in a couple times. Screw it. I doubt I’m the only rebel out there. Still, there’s pressure that comes along with it. If you REALLY like their restaurant, you hope they LOVE your write-up. If you hate it, you hope you’re not a total jerk while still being honest, and you pray they’ll speak to you again.

Don’t worry, it’s not the latter!

Truth is, I didn’t always know Greer Fredericks. Before we met I was a huge fan of her former South Norwalk restaurant, Mama’s Boy Southern Table & Refuge. Their brunch was especially a favorite and I would frequently take visiting family there. Any “excuse” to eat and drink there worked for me. Once I started to get to know Greer, that’s when she sold Mama’s Boy. It made me sad. After she left, the food there just didn’t cut it anymore, and now it’s something else entirely. 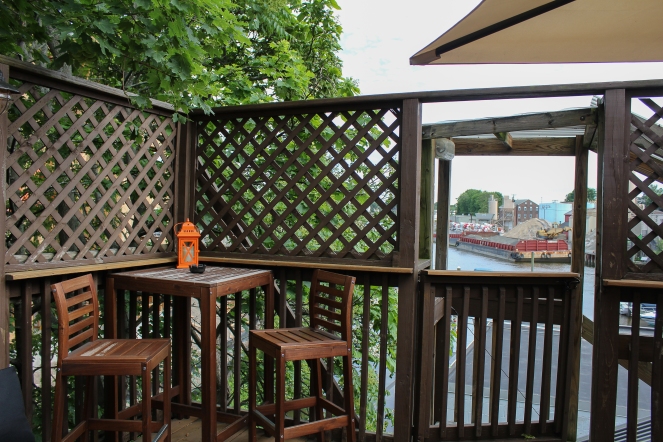 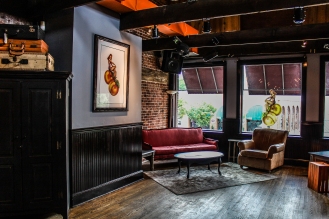 Peaches gets lots of big name acts and plenty of great local talent. 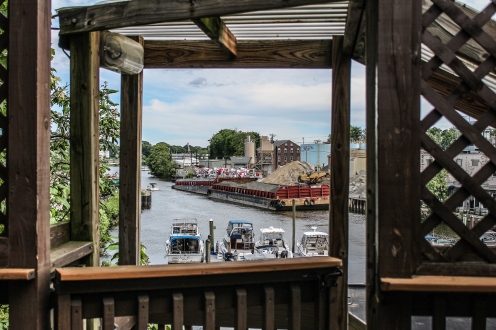 Greer did stick around Norwalk, thankfully. That gave me (and I’m sure a lot of other people too) hope that she’d open another spot. Peaches (also Greer’s nickname) was that next “thing.” It came to fruition when Apricot Bar & Grill—a two-story restaurant—opened next door to Fat Cat Pie Co. and rented their upstairs “room” to Greer. That second floor would be called Peaches Southern Pub & Juke Joint, featuring tasty, fun cocktails and southern inspired bar food. Its focus was live music and a damn good time. Not long after, Apricot sold their business, and Greer took over the whole space. She opened a full-service restaurant that locals have come to love, and the place, as she once told me, is what she had originally envisioned for Mama’s Boy.

What Peaches is, food wise, is true southern cuisine. There aren’t many of those types of restaurants around here. Think along the lines of fried green tomatoes, fried chicken, gumbo, pimento cheese, fried oysters, and their much-hyped shrimp ‘n grits. This is stick-to-your-ribs, soul-soothing grub.

A masquerade party at Peaches not too long ago! 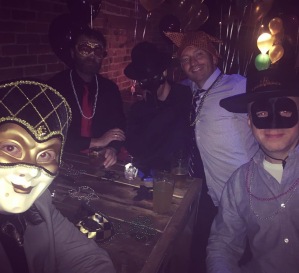 Peaches knows how to throw a party! 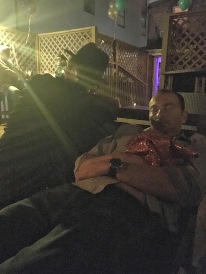 When your lightweight friends fall asleep outside.

Funny thing is…I hadn’t had a full-fledged meal there until recently. Initially I went for the bar scene, where guests are usually talkative and friendly, or I went as a theme party attendee. That masquerade a while back was particularly off the hook 😛

Speaking of the bar…That’s where you should start! 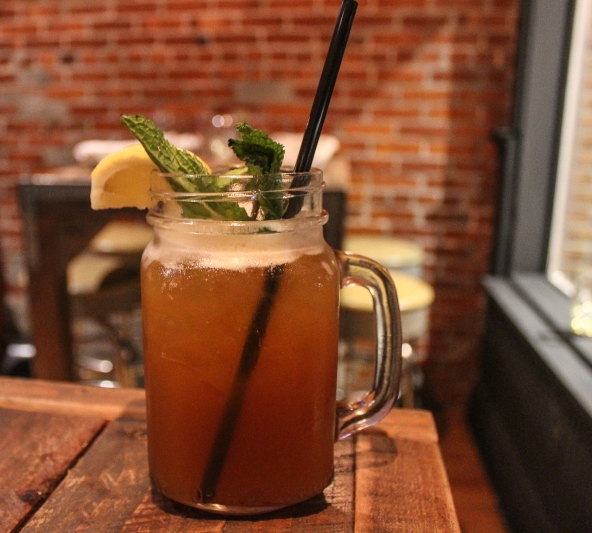 This bourbon sweet tea is easy to drink, but don’t be fooled! This will catch you off guard! 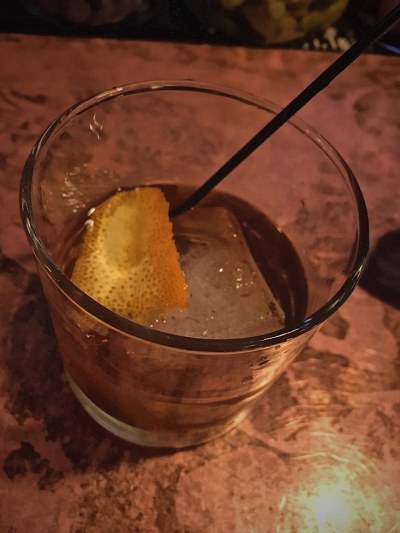 Peaches is one of the few Norwalk bars where cocktails are my go-to. In fact, it’s one of my prime spots to enjoy a couple of my favorite drinks; a Sazerac, an Old Fashioned, or one of each! The Saz is kept classic, they just make it correctly, absinthe rinse and all. The Peaches’ Old Fashioned has one wrinkle in it with the addition of peach bitters alongside angostura, for a little extra flavor injection.

Other nostalgic drinks are well represented too, like the tiki-geared Painkiller and the NOLA-inspired Hurricane, but you’ll also find the Sidecar and a Negroni to choose from as well. On a recent visit I opted to switch from my typical strong sippers and ordered Peaches’ Rosemary Maple Bourbon Sour (Four Roses Bourbon, rosemary, Dorset Reserve Maple Syrup, egg white). Not only is this drink pretty to look at, it’s easily in my top three Fairfield County cocktails. It’s sweet, strong, sour, creamy, and you can taste each ingredient without one thing overwhelming another.

If cocktails aren’t your jam, Peaches keeps a few local brews on tap with some seasonals, and more in bottles/cans. They’re whiskey and bourbon selection shouldn’t be overlooked either. 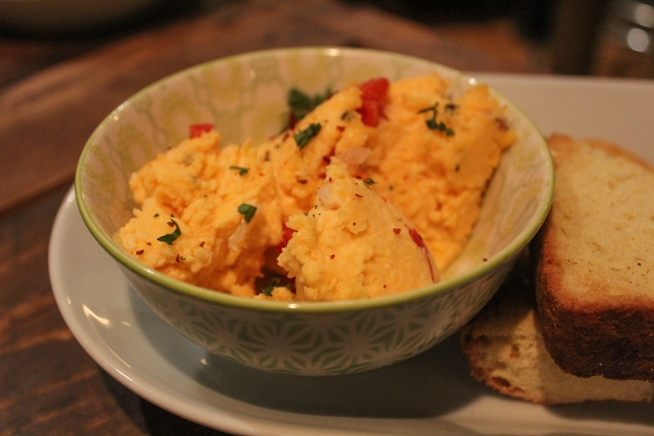 Some dippable items are worth it too, like this pimento cheese!

Food? Like I said it took me a while to have a full meal here. Every time I went, I did snack on smaller things. My first few visits involved Peaches’ pickled deviled eggs, a resurrected Mama’s Boy appetizer that I was a personal favorite. The beet-brined eggs aren’t just visually attractive, they’re tasty. The pickled okra adds a pop of vinegar, the Aleppo pepper gives the eggs some heat, and the braised bacon brings pork fatty greasy goodness. These small bites are the perfect drinking companion. You’d be wise, especially if you’re hungry, to order the County Fair Bacon; tender, thick-cut bacon chunks that are battered in funnel cake mix and deep fried. This ode to carnival food is a fun, sweet, salty, guilty pleasure dish.

You totally drooled at the sight of battered bacon. 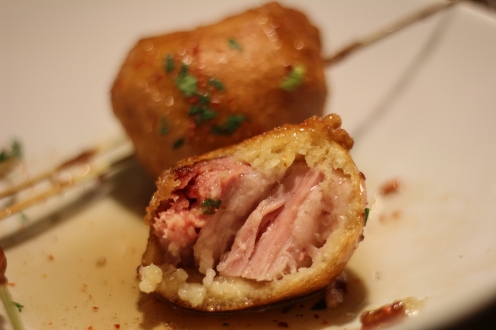 When I finally did stay and try a bigger plate of food, I opted for “The Thigh High” chicken sandwich. A wise choice for fried chicken sandwich lovers (like me). It uses the tender, more flavorful thigh meat over the breast with plenty of house pickles, a slightly spicy white BBQ sauce, served on griddled Texas toast. It comes with excellent hand-cut fries and with your potatoes, use Peaches’ chili pepper infused vinegar, and use it liberally.

Speaking of chicken, there’s another way to have it here. In “bucket” form. That’s right! Homemade fried chicken! It’s crispy on the outside, juicy on the inside. It comes with cornbread, slaw, and a side for $34. It’s a damn good deal and filling enough for two people, that is, if you like to share.

Another dish that I thought was a hidden gem were the blackened catfish tacos. The jalapeño/peach slaw, spicy remoulade, and fish that practically glistened made for a memorable taco creation. I’d be thrilled going to Peaches just to knock back this lovely trio.

There’s still a lot to try at Peaches, including Sunday brunch, which gets a lot of buzz. Considering how damn good each visit has been, I think it’ll be fun getting through the entire menu. In between gym visits, of course 😉