This is easily one of the most incomplete blog posts you’ll ever see here, but ya know what? Don’t care. Sometimes you just have to shout-out something you love, especially when it’s focused on pizza and what’s a no-doubt great NYC cheeseburger.

City folks likely know it, but for those in Connecticut and Westchester that mostly indulge me on Food Dudes, you probably only follow Emily Pizza and Emmy Squared, but have not yet been. You know, the place with the rectangular pizzas and beefy burgers that ooze orange special sauce.

The truth is, this post should’ve come a lot sooner. I’ve been to Emily West Village and Emmy Squared in Williamsburg twice each. Even if I don’t plan on going, if I’m near one I stop in for a pie. Three out of those four times my iPhone pictures came out like absolute shit. It was dark or I was drunk as fuck. Probably both. One time, though, I had a camera with me and snapped a few pics that will suffice for this quickie.

Why now, you ask? I caught the first season finale of The Flay List, that show with Bobby and his daughter, Sofie. The way the show goes is there’s a subject—this one was pizza—and Bobby and Sofie each pick a place for the other to try. Bobby chose Joe’s—a wise choice, and a quintessential New York slice—while Sofie, who usually picks something new school, took her dad to Emily. I was so stoked that I sat up in bed like The Undertaker.

If you haven’t been, this New York spot serves Detroit style pizza. 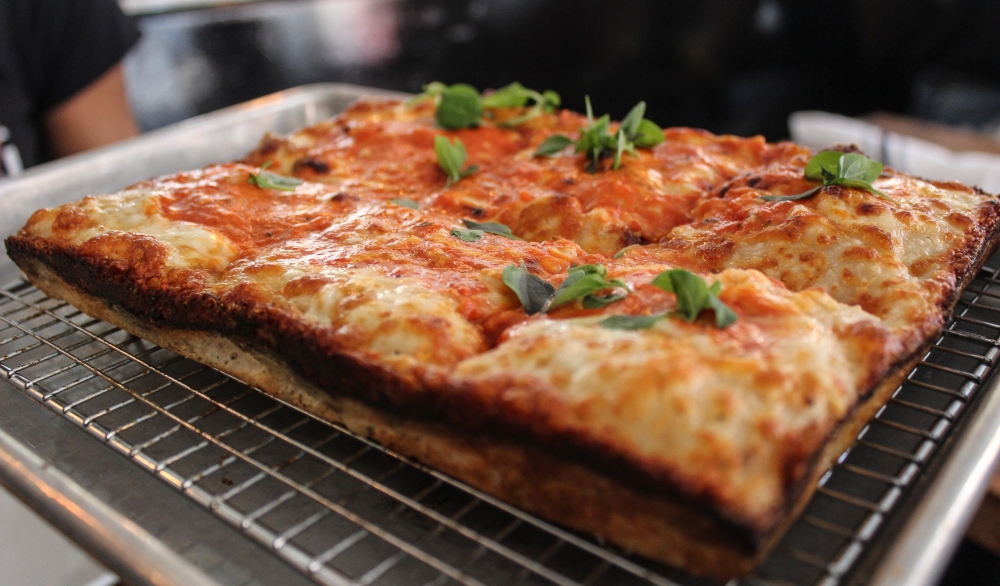 What the fuck is that, right? I feel you. I thought the same thing at first. Detroit style is cooked in a dark, rectangular pan, so it’s thick. In this case, thick doesn’t equate to dense. In fact, it’s ultra-light, not a whole lot of doughy chew, kinda crispy, and the cheddar they sprinkle around the edges and crust, well, what’s not to like?

I’ll admit, I haven’t eaten a lot off the menu at either location. I’ve tried some of their staples; margherita, a vodka sauce pie, and their Colony (roni cups, pickled chilis, honey), a nice combo of heat and sweet. There are still a bunch of green pies with tomatillo sauce and sauceless whites to dive into. I figure by writing about it, it’ll spark a revisit with a group of people *hint hint* who will want to order every single one.

Yeah, I’m fanboying. It’s not often that I’m willing to eat at a place, then carry a whole pizza home from Brooklyn via public transportation. Emily, that’s what the fuck I do for you, baby. If that’s not love, I don’t know what is.

Actually, I do know what love is…It’s your burger!

The Emmy Burger is decadent but it’s simple at the same time. The simplicity is it stands on its own without a ton of toppings. The decadence? Double dry-aged Pat LaFrieda patties, melted Grafton cheddar, and sweet caramelized onions on a Tom Cat Bakery pretzel bun. The kicker is that tangy orange sauce that drips down the cheddar covered beef.

How do you choose? Pizza or an Emmy Burger? You don’t. You get both. Split it with someone you tolerate. The hard part is to not keep ordering the same thing every time. Me = guilty of this, at least I am when it comes to Emily Pizza. There’s a lot more to try, especially when they do dumpling collaborations with Mimi Cheng’s and mouth-watering specials.

Oh, and if that’s not enough, The Flay List spilled the beans about Emily’s secret pie, “The Goods.” It’s an Emmy Burger pizza. Need. Very much need.